My Little Pony has an interesting charm that makes it stand out from the rest and a very large fandom. Now there is My Little Pony – Friendship Is Magic! I’m happy to share this giveaway with you.

If you are a fan of My Little Pony and have been following the developments in Equestria, you would love this new Cutie Mark Crusaders adventures on both DVD and new App! All is up for grabs in this cool giveaway with 3 winners.

Bringing You Moments To Celebrate 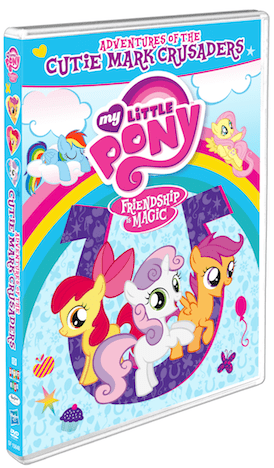 Adventures of the Cutie Mark Crusaders is becoming one of the popular movies to watch and to interact with!

PlayDate Digital has announced the new Cutie Pox Storybook App. When Apple Bloom becomes impatient waiting for her cutie mark, she decides to take things into her own hooves! In this interactive story book, follow Apple Bloom and the fillies as they learn that taking the easy path toward your goals isn’t always the best way.
Enter the world of Equestria in this storybook adventure full of excitement, humor and friendship!  The release of “Cutie Mark Crusaders” marks the first of a series of planned collaborations between PlayDate Digital and Shout! Factory to cross-promote My Little Pony Friendship is Magic stories and media.

The fans of the Little Pony do know that every Little Pony is looking for the sign to obtain her own Cutie Mark that is unique and can be used to make a difference for those who live in Equestria. Guess what, this new My Little Pony – Friendship Is Magic: Adventures Of The Cutie Mark Crusaders DVD would tell you all about those cutie marks and how little ponies are getting them!

This amazing DVD is being released on February 24, 2015, in the U.S. and Canada from Shout! Factory Kids in collaboration with Hasbro Studios. With each DVD, there’s a bonus offered : A Sing-Along and Coloring Sheets.

Here’s the official DVD description to ignite your further interest:

In EQUESTRIA, obtaining a CUTIE MARK is an important coming-of-age moment for a young Pony. After all, Ponies acquire their CUTIE MARKS only after they discover a unique characteristic about themselves, setting them apart from all other Ponies. So when Sweetie Belle, Scootaloo and Apple Bloom meet, they instantly become friends and make it their mission to find their CUTIE MARKS! They are The Cutie Mark Crusaders!

Take a look at the official trailer, kids would love it!

Complete the tasks below to earn entries into this giveaway.

Refer your friends using your Unique Link inside Rafflecopter to earn even more entries to win.