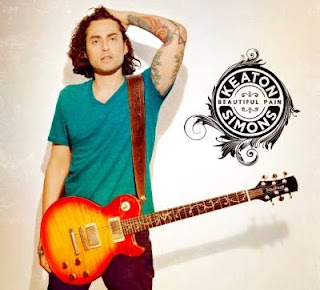 I really appreciate Keaton Simon’s bluesy musicality, soulful and poetic lyrics and overall passion for music. His guitar-playing is stellar. This is apparent in his just-released (4/30) album, Beautiful Pain, co-produced with Mikal Blue (Colbie Caillat, One Republic) and mastered by Gavin Lurssen of Lurssen Mastering. Beautiful Pain also includes co-writes with friends and peers Jason Mraz, Jason Reeves, Glen Phillips (Toad The Wet Sprocket) and Mikal Blue among others.

If I had to describe Keaton and his music in one word, it would be: authentic. Keaton Simons is truly what the Los Angeles Times terms “a triple threat.” He captivates audiences with an authentic voice, compelling and soul-baring songs, and a true command of both acoustic and electric guitars in every genre. The energy and passion that Keaton brings to his work (whether in the studio or performing live) are as infectious and stirring as his lyrics and melodies.

A regular in The Hotel Café singer/songwriter circuit, Keaton Simons has been recognized by Examiner.com as achieving “cult-like” status in his hometown of Los Angeles, CA. But as most know, Keaton is far from being just an ”L.A. guy” let alone a “new artist” on the mainstream map. His debut EP Currently was released on Maverick Records in 2004 and his debut full-length album Can You Hear Me was released on CBS Records in 2008. Since then, he has toured nationally and internationally, opening for Coldplay, Train, Guster and REO Speedwagon amongst others. He has also worked as a writer, musical director, singer, bassist and guitarist with such notable acts as Gnarls Barkley, Snoop Dogg, Josh Kelley and Tre Hardson (The Pharcyde.)

In addition, Keaton’s music has been heard in dozens of feature films and television shows, including Sons of Anarchy, Private Practice, NCIS, Malcolm in the Middle, Numb3rs and Hollywood Heights. He has also performed on The Tonight Show with Jay Leno, The Late Late Show with Craig Ferguson and Last Call with Carson Daly. In 2011 Keaton appeared on VH1’s Celebrity Rehab with Dr. Drew alongside stepfather, actor Eric Roberts, who was a patient. A performance of his song “Unstoppable” on the show resulted in over 10,000 iTunes downloads in only two days.

“After bouncing between major label contracts and promises of new deals, I’m following my instincts, assembling my dream team, and hitting the launch button on the type of album I’ve been wanting to put out for years,” says Keaton Simons. “Beautiful Pain shows who I am as an artist, a songwriter, a musician and a producer.”

Beautiful Pain is Keaton’s most universal release to date, and maintains his high caliber of songwriting, production and musicianship. Fans can also expect to see Keaton back on tour throughout the US, performing both solo acoustic and with his full band at a venue near you including:

Here is his video for the current single “Beautiful Pain”. The video was directed by Nick Spanos and executive produced by long time friend, David Duchovny.

“This song has tremendous personal meaning to me. I wanted to show the extraordinary side of real, everyday people, and illustrate that love is worth fighting for,” said Simons when asked about the video’s concept.

Win your own copy of Keaton’s new cd right here. We will be giving away two copies! Enter via Rafflecopter below and best of luck!