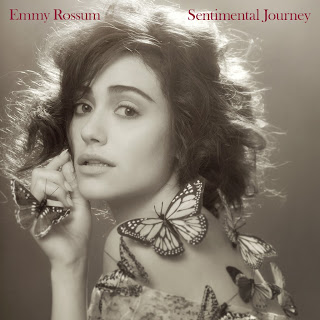 I know Emmy Rossum best from one of my favorite wacky and outrageous programs on Showtime, Shameless, where she plays the ever vivacious Fiona Gallagher. I wasn’t aware that she sang until I was given her latest cd to review, Sentimental Journey.

What I know of Emmy is that she’s beautiful, intelligent and an incredible actress. What I didn’t know was that she could so seamlessly bring her gifts in embodying a character into her music. The album comprises covers of classic hits from the ’20’s to the ’60’s. I really love the tone of her voice as it fits each and every song. The Old Hollywood sound is unlike most of what I hear lately and I really love it.

I enjoyed all the tunes on this cd as they aren’t your standard fare these days. Some of my favorites are The Summer Wind. This song takes me back to Ol’ Blue Eyes with its jazzy feel.

I also really like These Foolish Things. Here Emmy’s voice has an airy sensual quality that is intriguing and beautiful.

Emmy’s 12-song ‘passion project’ is an emotional musical journey for her, with each song representing a month of the year.

“Each song needed to either lyrically or emotionally reflect the corresponding month,” Emmy explained. “Some songs were obvious fits, like Summer Wind for June and Pretty Paper for December. Other songs were less literal fits. I chose Nobody Knows You (When You’re Down and Out) for September because, to me, the plaintive melody and lyric emotionally reflect the cold weather creeping in and the sense of melancholy we can get in the fall months.”

I think this is a great cd for Valentine’s Day. I love the laid back mellow feel.

You can catch Emmy as a guest on The Late Late Show with Craig Ferguson on February 6th and on the CBS Early Show, performing a song from Sentimental Journey on February 9th.

You can buy the cd at Amazon or on iTunes. You can also check out Emmy on Twitter!

Disclosure:  I participated in this campaign for One2One Network and received a copy of the CD to facilitate my review. All opinions stated are expressly my own.