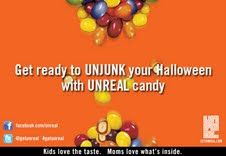 I’m on a mission to unjunk my life, whether it be cleaning the closets, giving clothes to Goodwill, or just in general getting rid of things that I and my family no longer need.

Last Sunday I had a party for family and friends to share some good music, laughter and to introduce them to UNREAL Candy. UNREAL Candy supplied the treats so I had plenty to give to my guests and enough to give them goody bags to take home! It was misty outside, but we were warm inside enjoying the treats along with some snacks and beverages.

So, you may be wondering what is so unreal about UNREAL candy. Well, it all started with a question from a 13-year old. A few years back, Michael and his son Nicky got into an argument since Michael had taken most of his son’s Halloween candy away.

Nicky went online to prove to his dad that candy wasn’t so bad, only to find that it actually was worse than he thought with all the hydrogenated oils, corn syrup and artificial colors, flavors and preservatives. He thought that candy would taste better without all that junk and set out to prove it with his dad and older brother and that’s the genesis of UNREAL Candy. 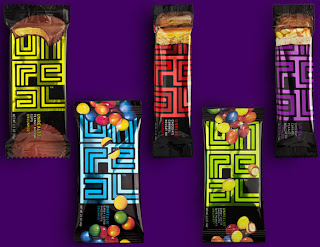 Today, UNREAL candies have replaced the “junk” in candy with double the cacao, more peanuts, real milk, cane sugar and organic palm fruit oil. They also have 30% less sugar, 60% more fiber and 250% more protein on average compared to the competition. They use natural coloring using beets and red cabbage (don’t worry you don’t taste it!). They are also committed to responsibly sourcing their products.

The favorite here was the Candy Coated Chocolate with Peanuts, the shell was crispy and the large peanuts were delicious. The Peanut Butter cups also went over great. They were slightly less sweet than what I’m used to, but then again, I always thought the others were too sweet. I’d take a few bites and then it was too much. The peanut butter cups from Unreal just melt in your mouth. So good!

The adults were pretty happy all aound though it took the kids more time to get used to something “different”. I have to say though that by the end of the party, they were wanting more and excited to take home the goody bags! They loved the chocolate caramel peanut nougats and the chocolate coated peanuts best.

I’m very pleased that UNREAL candy is out there. What’s cool is that you’d think it might be overpriced, but it’s not at all. It’s comparable with the competition and you can find it at CVS, Walgreens, Rite Aid, Kroger, Staples, Ralph’s and many more retailers.

I’m thinking I’ll be hitting CVS to pick up UNREAL candy for Halloween this year! Time to unjunk!

Disclosure: Party supplies and candy were provided by Global Influence and Unreal Candy, however all opinions herein are strictly my own.