Life can’t get much better for Sam Lock. Popular, good-looking, and with a future as a professional football player. every guy at Stanton High School wishes he were Sam. That is, until his championship football game, when Sam accidentally links with an ancient source of energy known as the Veil and reveals his potential to become a powerful sorcerer. Sam is whisked off to Atlas Crown, a community of sorcerers who utilize the Veil as a part of everyday life. Once there, he trains beside a mute boy who speaks through music, an eternal sage who’s the eyes and ears of the Veil, and a beautiful girl who’s pretty sure Sam’s an idiot. As it becomes clear Sam’s meant for power magic-the most feared and misunderstood form of sorcery-people beyond Atlas Crown learn of his dangerous potential. An exiled group of power sorcerers are eager to recruit Sam, believing that he is destined to help them achieve their long-held goal. If they succeed, they could bring about the downfall of not only Atlas Crown. but all humankind. 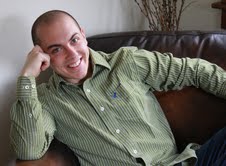 Daniel A. Cohen was just your average business student. Microeconomics, finance, marketing… you name it, he had to do a PowerPoint presentation on it. One dark and stormy night, he was bitten by the radioactive realization that memorizing business jargon could possibly be the most boring activity known to man.

After gaining eagle-eye vision, abs that could grate cheese, and a talent for imagining things (including his cheese-grating abs), he wrote his first novel and began his epic battle against the formidable business jargon. He continues to fight the good fight by playing saxophone and writing YA fantasy, forever hoping his Veil trilogy will help inspire others to join his cause.

Last day to enter is May 31st

Open to anyone who can legally enter, receive and use an Amazon.com
Gift Code. Winning Entry will be verified prior to prize being awarded. No purchase necessary. You must
be 18 or older to enter or have your parent’s permission. The winner will be chosen by rafflecopter and
announced here as well as emailed and will have 48 hours to respond or a new winner will be chosen.
This giveaway is in no way associated with Facebook, Twitter, Rafflecopter or any other entity unless
otherwise specified. The number of eligible entries received determines the odds of winning. VOID
WHERE PROHIBITED BY LAW.