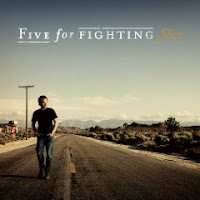 I was very happy when invited to review Five for Fighting’s new album “Slice” by the One2One Network. I’ve been a fan since “Superman” and also loved “100 Years”.

John Ondrasik has done it again with this new album, co-written with Academy Award-winning composer, Steven Schwartz. It is truly a slice of life, telling stories with lyrical melodies and thought-provoking lyrics.

It is rare to be able to combine catchy smooth melodies with lyrics that actually have something to say, but, “Slice” has both.

I actually like all of the songs on the album, but there are some I love. My favorite is “Augie Nieto” (see video above). This song was written about Augie Nieto, a prominent leader in the fitness industry for nearly 30 years who received a diagnosis of ALS or Lou Gehrig’s disease in March 2005. He is now co-chairperson of MDA’s ALS division and very inspirational.

This song really touched me. Not only is the melody beautiful, but John’s beautiful lyrics of Augie, “two wheels closer to God” are just simple, poignant, yet totally uplifting.

I also love “Tuesday” with its beautiful melodic string arrangements which references 9/11 and about not forgetting what we learned that day.

“Chances”, which is the album’s first single, is also very upbeat, ending with “Chances are only what we make them… and all I need.” It speaks of how if you don’t take that chance, you may always wonder what might have been.

Other songs to check out include, “This Dance, “Nowhere Bar”, “Above the Timberline”, and “Story of Your Life.”

This album reminds me a bit of Elton John, Billy Joel, Snow Patrol, and The Fray. Yet, it is not really like any of them due to Ondrasik’s unique take on life.

It’s rare to me to find quiet in the upbeat, to find depth and meaning in the bright tempo. But, it’s there in “Slices” – and perhaps that’s what I love most about it.

Check it out on Amazon and iTunes.