Was Mr. Darcy real? Is time travel really possible? For pragmatic Manhattan artist Eliza Knight the answer to both questions is absolutely, Yes! And Fitzwilliam Darcy of Pemberley Farms, Virginia is the reason why!
His tale of love and romance in Regency England leaves Eliza in no doubt that Fitz Darcy is the embodiment of Jane Austen’s legendary hero. And she’s falling in love with him. But can the man who loved the inimitable Jane Austen ever love average, ordinary Eliza Knight?
Eliza’s doubts grow, perhaps out of proportion, when things start to happen in the quiet hamlet of Chawton, England; events that could change everything. Will the beloved author become the wedge that divides Fitz and Eliza or the tie that binds them? 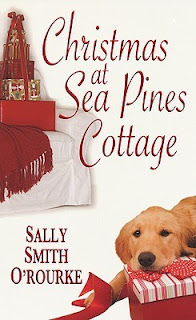 With its rough gray shingles and weathered slate roof, Sea Pines cottage seems, at first glance, past its prime. But inside this remote fisherman’s house, a driftwood fire crackles in the fireplace, brightly colored rugs cover the floor, and cozy cushions dot the worn, welcoming furniture. A young man named Robert has retreated after the war, planning to spend his days writing, tending to the local lighthouse, and nursing his injuries. For company, he adopts a young Golden Retriever puppy named Meteor.
Robert and Meteor spend months in quiet companionship, until the day Robert rescues a young woman from a storm at sea. Strong-willed and intelligent, Laura sees past Robert’s injuries to the proud, passionate man beneath, and–with some matchmaking help from Meteor–they begin a new life together at the cottage. But even Meteor’s tireless devotion can’t protect his cherished family from all of life’s unexpected challenges–hurdles that will teach each of them lessons of courage, faith, friendship, and the enduring love that can sustain us through life’s coldest seasons.

Sally Smith O’Rourke is a surgical scrub nurse at the City of Hope national cancer research hospital in Duarte, California and resides in the near-by Victorian village of Monrovia.

With her late husband, author Michael O’Rourke (aka F.M. O’Rourke) Smith O’Rourke owned and operated a medical advertising company where she used her diverse talents to produce and co-write teaching films and videos. Working not only with major medical and surgical manufacturing companies but also network television. These endeavors ultimately led to a collaboration on two feature films (direct to video) and three published novels.

The wife and husband writing team of Sally Smith and Michael O’Rourke, being long-time fans of Jane Austen, wrote The Man Who Loved Jane Austen released by Kensington Books in 2006. Kensington followed that very successful effort with The Maidenstone Lighthouse in 2007 and Christmas at Sea Pines Cottage in 2009, both also collaborative projects by Smith and O’Rourke. Published after her partner and spouse’s untimely death in 2001, the publisher chose not to use the names Michael O’Rourke and Sally Smith (as the manuscripts were presented), releasing all three books under Sally Smith O’Rourke.